~ All That Glitters by Liza Treviño ~


Synopsis:
Alexandria Moreno—clever, sexy, ambitious and, at times, self-destructive. She blazes a path from Texas to Los Angeles at the dawn of the 1980s to make her dreams of becoming an A-list Hollywood film director come true. She and her best friend arrive in Los Angeles with little more than hope and the determination to make it big. Alex, a beauty as dark and mysterious as her scarred heart, stands at the bottom of the Hollywood mountain looking up, fighting for her chance to climb to the top. Will her quest to live fast and take no prisoners on her way to success destroy her in the end?

All That Glitters is a women’s fiction Jackie Collins-type saga that introduces a strong, driven Latina heroine at the center of a rags-to-riches story spanning a decade of action. Along the way, Alexandria walks the fine line separating ambition and self-destruction, and discovers that some sacrifices will cost her everything.

What early readers are saying:

"Treviño tells her story with wit, intelligence, and an undercurrent of sadness at the plight women face to make a name for themselves as human beings instead of strictly as women. Treviño may have cloaked her ideas in entertaining vignettes and snappy dialogue, but underneath is a bite that stays with you."
— Jonathan Marcantoni, author and publisher of La Casita Grande Press.

"Liza has a way of taking you with her as she tells this very compelling story. She draws readers in with her as she describes scenes and characters with colorful detail and vivid imagination. This story is a testament to it's title: it really glitters!"
—Reesha Goral, author, The Servant Boy

"With distant echoes of Jacqueline Susann’s Valley of the Dolls in the background, Alexandria Moreno, the protagonist of All that Glitters, chases after the allure of Hollywood, all the time substituting pills, booze and sex for genuine happiness. It is only after she reaches success that she has an awakening leading her to realize the emptiness of her aspiration, and finally accepting true love. Kudos to Liza Treviño for giving us this unique image of the New Latina! I urge reading All that Glitters. You won’t regret it."

Jamie Douglas stood out in any crowd. Angular looks punctuated by oceanic blue eyes, a naturally lean athleticism, and down-to-earth boyishness had made him a reigning movie star around the world for almost twenty years. And right now, Alex saw Jamie’s eyes find hers through the crowd. When they caught each other, a flash sparked between them like one of those popping camera bulbs. Jamie’s surprised look gave way to a lopsided grin; it was a look so familiar to her.
Alex registered Nick snake his arm around her thin waist and she broke her gaze from Jamie.
“Okay, Alley Cat, time for our victory lap.”
“Perfect timing,” she said.
Timing—everything always came down to timing. It seemed to her that her timing had always been off. Not crazy off, just that extra millisecond that pushed everything either too early or too late. And now, she understood that it was too late.
Suddenly, she couldn’t bear to go through with the whole charade of tonight. Maybe, she couldn’t even bear to go through with the whole charade of her life any longer. Just leave, a soft voice whispered inside her head. There’s nothing written you have to stick around. It’s practically programmed into your DNA that you’ll be checking out of this world early.
All at once, Alex understood that simple fact. She, Alex Moreno, would leave Los Angeles tonight as anonymously as she had arrived nearly a decade earlier. She knew that wasn’t an entirely accurate account of how she’d started.
Now I’m alone, and that’s just how I knew things would always turn out. 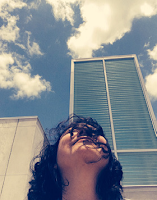 Liza Treviño hails from Texas, spending many of her formative years on the I-35 corridor of San Antonio, Austin and Dallas.  In pursuit of adventure and a Ph.D., Liza moved to Los Angeles where she compiled a collection of short-term, low-level Hollywood jobs like script girl, producer assistant and production assistant.  Her time as a Hollywood Jane-of-all-trades gave her an insider's view to a world most only see from the outside, providing the inspiration for creating a new breed of Latina heroine.