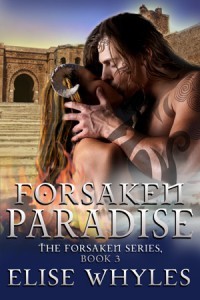 What could be more dangerous than loving a rogue?

Condemned as a rogue and punished by his master, Angrail, one of the Seven Paradise Walkers, has wandered mortal and immortal worlds for centuries. He's determined to find those responsible for killing an innocent woman and the child she carried, no matter the cost to himself.

Ephynia, a demoness with scars, has spent a lifetime serving Nerafail, Lord of the Dead. When she unwittingly stumbles upon the one being who can end her loneliness, the battered Angrail, her life changes forever.

Can Angrail find love in the arms of a demoness at war with herself? Or will the secrets hidden within the bowels of their worlds destroy them before they can find peace?

Angrail moaned, agony flowing like water through him. He could taste the souls wanting peace, hear their weak cries, but could do nothing. Shifting, the wounds he'd suffered screamed in protest, pain lacing through his muscles.

Inhaling a sharp breath, he froze. The sweetness of a strange smell stirred something within him. Blood, bone, life clung to whoever hovered nearby. The smell of smoke, of flame swirled in the air as well. Cracking his eyes open, he blinked to clear his vision and tensed.

Bronze skin glistening in the fading sunlight, a female stood at the mouth of the cave. Her arms were crossed beneath her breasts, a sword hanging at her hip. Multi-toned hair was slicked back, revealing the ornately decorated curve of a horn. She was a huntress. But why would she have removed him from the battlefield? None of her kind, or his own brethren, were allowed to touch him. Nerafail's generosity had bound them to watch him suffer. Aye, the old lord was a fool, one he had no desire to seek forgiveness from.

"What…" Licking his dry lips, he struggled into a sitting position. His head swam with the effort, his stomach revolting at the pain swarming him. "What do you have need of me?"

"You are awake. Excellent." The demoness turned, her eyes narrowed on him. "What do I have need with you? I should hope you have such an answer for me, guide."

Coughing, Angrail leaned his head against the stone, his chest tight, burning with the need for oxygen. Being trapped within the mortal frame had its drawbacks. "Who are you? Nerafail would not permit you to aid me."

"Aid? I have no desire to aid you. I wish to know why you called me back from my task." She stalked to him, her hips swaying. Hunkering down by his feet, she tilted her head. "I was sent forth to retrieve a soul and had nearly done that when I felt you. You kept me from leaving the field, I would know why."

"Go to Hardress." Angrail winced. "Back to your revelry and—"

"I would go home, but you refuse to release your bonds. You will tell me what I wish to know." She slammed him into the rock, her fingers tightening around his throat.

With her touch, Angrail's body arched, gasping for air as pain and heat washed over him in waves. He could feel her grip tightening, feel the force of her anger, and felt his own stirring.

He blinked, the images dancing in his mind ones he'd never seen before. Images that instinct told him were important.

Flames danced around them. Sweat beaded and rolled between her breasts. Her tongue licked at his skin, and her horns flared with passion. His shaft throbbed in yearning at her body undulating, her hips gyrating slowly. To and fro, rolling, pitching, she remained in constant motion, her hands trailing over her flesh, cupping her breasts. Her fingers plucked at her nipples, pulling on them until they stood hard, pointing toward him. She shuddered, her hand drifting down her abdomen, slipping beneath the braided belt of her skirt.

Heady, rich, the scent of her essence filled the air. Sweeter than honey, it teased along his shaft, filling him with want. Faint, the echo of her sliding her fingers through the folds between her legs grew in volume with each slow roll of her hips.

He pushed the images out of his head and shoved her arm aside, his eyes narrowing. "Careful, huntress, you're showing weakness."

"Tell me and I'll ease your misery."

Born in Northern British Columbia, Elise is a small-town girl. She writes in a variety of genres including paranormal, contemporary suspense, m/m in various lengths. Currently, she lives in British Columbia with her husband and son, one dog, one cat, and a gecko. Elise enjoys reading as much as she does writing, with some of her favorite books being read until they fall apart.
She is currently working on the next book in the Forsaken Series, Burning Rain. As well she has a new contemporary she’s working on. For more information on Elise, or to check out her books you can find her on Facebook, twitter, and her website.