The Brotherhood of Merlin Book 2 - Lycenea by Rory D. Nelson 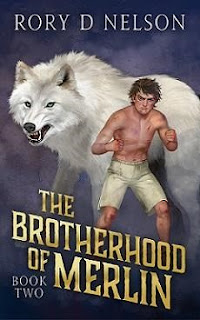 Merlin returns to Lycenea a hero, victorious over the Visi-Gauls in a gruesome and exhaustive campaign that claimed the life of one of his men and saw the annihilation of the Visi-Gauls’ Southern Army.
Merlin’s peaceful reprieve is cut short however, as he must now find and expose the corrupt Senator who initiated the war in the first place and plots to subvert the Empire for himself. He is aided by the powerful sorceress, Morgana and Felinius, a former disgraced and condemned knight who knows the inner workings of the Brotherhood.
Merlin must also protect two of the captives he rescued during the war with the Visi-Gauls, one of whom is a boy named Dante, whose power has been prophesized to defeat Herod Antipaz, the corrupt Senator, and his deadly allies who threaten to destroy Gilleon.
Herod makes plans of his own for eliminating Dante. The boy’s problems continue to mount precipitously- for not only is he being ruthlessly hunted down by Herod’s minions, but he must also face down a brutal training program in Round Table Academy, where he faces elimination on a daily basis. Should he be eliminated, he will no longer be under the protection of Merlin and his Brotherhood and his death almost a foregone conclusion.
His only hope, his only salvation is Merlin- as is the country of Gilleon.

Check Out Book One: Gilleon 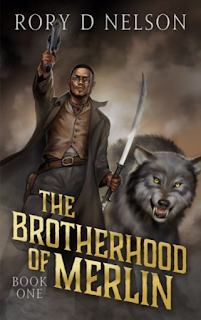 Five hundred years after the death of King Arthur, a sadistic tyrant of Visi-Galia, attacks unprotected and vulnerable townships in Gilleon, igniting a deadly chain of events. Because he was unfairly denied a proper chance to compete for valuable mine rights and outbid by a Councilman from Gilleon, he reasons that he can invade Gilleon's vulnerable townships and force the Council to negotiate with him.
Merlin, the lead knight in Lycenea, has foreseen just such a predicament. With the gifts of premonition, telepathy and intelligence, he and 9 of his most formidable knights go into battle against Jason and his force of nine thousand.
At stake is everything. The fate of the prisoners who are awaiting to be sold into slavery rests in the hands of the deadly knights. Specifically, two girls who were attacked in Missalia and are now orphaned, are at the mercy of the sadistic King. Will Merlin and his band of knights be able to rescue them in time?
Adele, the older sister, has plans of her own for escape. Will she prove successful or will her plans be foiled? If she is caught, what will become of her and her sister, Sylvia?
Dante, a boy from Coifen, is also now orphaned. He is the sole survivor of a brutal attack on his family. An unlikely heroine has come to his rescue- a mysterious white wolf. Unfortunately, the attack has left him blind. He and his guardian make their refuge in a remote cave. He clings desperately to the hope that God has spared him for a reason. Every night he goes to bed, he says a prayer to his talisman, the Merlin, a game piece that his father gave him before he was forced to abandon him. It was the last gift he received before all hell broke loose. Will he be rescued? Will he find a permanent haven? His fate also lies in the hands of the Merlin.
Merlin and his troupe lead the Visi-Gauls in a high stakes game of cat and mouse. Jason, though capricious, is not stupid. He uses every means at his disposal to eliminate Merlin. Who will prove the victor? Fighting a severe war of attrition, it seems at times that Jason will inevitably win; but don't count the Merlin out. He is beyond slippery. Every time it seems that Jason has the gifted knight, he is thwarted yet again.

Get Your Copy of Book One: Gilleon for FREE!

He once lived a peaceful existence in the quaint little town of Coifen with his mother, Sophia, his father Lucian, sister Isabella and dog Mitz. That life is abruptly shattered when his father is  exiled and the rest of the family is plunged into a fight for their life. With assassins on their trail, they are eventually cornered and forced to defend themselves, along with the aid of their neighbors.

Tragically, Dante’s mother, sister and dog are brutally killed. He barely escapes with his own life, if not for the intervention of a mysterious white wolf, whom he named Cammilia. Together, they hole up in a remote cave for months until they are finally rescued by Merlin.

Though blinded in the attack that killed his family, Dante is brought to Round Table Academy by Merlin and given the choice to enter their school as a recruit. Feeling it is the only way he can regain some control over his life and maintain a safe haven, he accepts.

As promised by his headmaster, Germanicus, the training is brutal, the academics grueling and mentally demanding. In addition, he faces elimination bouts nearly everyday. Should he fail in even one of his tests or lose an important match, he will be expelled from the school- most are. Almost fifteen hundred boys enter Academy, but only a dozen or so make it to knighthood. So the odds are not in his favor.

Yet he toils on with an indefatigable spirit and inadvertently makes a powerful enemy- Maximus, the start recruit and only son of King Menelaeus. He is everything Dante is not- over-privileged, spoiled, arrogant. He has an ingrained sense of self-entitlement and it is reinforced by his stellar performance as a recruit.

Despite this, he feels threated by Dante and makes it his mission to see that Dante is removed from the Academy- at all costs. And he is not above resorting to dirty tricks and subterfuge to achieve it.

Dante’s problems continue to mount precipitously. Not only is he in danger of being removed from the school since being targeted by Maximus, but he also faces the looming threat of the man that ordered his death. Little does he know that Herod, the man who seeks his demise and the dissolution of the Brotherhood is right under his nose. And he has put his own plans into action, leveraging the rivalry between Dante and Maximus.

Dante is resourceful, intelligent and relentless, but will it be enough to thwart the pressures that seem to be closing in on him like a coiled serpent? He has the support of his newfound companion, Cammilia and Merlin. He clings to them desperately like a raft in the middle of the ocean, but will they be enough to stop the machinations of Gilleon’s most powerful senator and his vast resources? Only time will tell. 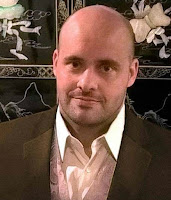 Author Rory D Nelson is an accomplished actor and has been seen in several high school productions of “Oedipus Rex,” “My Fair Lady,” and “Little Shop of Horrors.” He owns a window cleaning business in the Sacramento area, enjoys wine tasting, snowboarding, traveling and working out. Rory D Nelson is an eclectic and prolific writer, having written numerous comedy skits, commercial parodies, and ghost-written many humorous t-shirts. He has the most unusual imagination of any fantasy author, since he also brings his deranged sense of humor into play in his books.