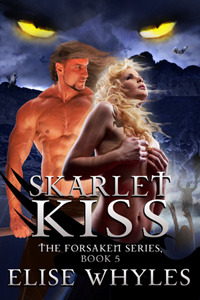 Can one who served the enemy find love in the arms of a condemned man?

Una has spent her life serving Amuliana, the goddess of immortals. Now she stands on the brink of a change, one that can her give back the life she lost to Amuliana's meddling. But the change that comes will shatter the peaceful existence she knows and give her a new understanding of love and life. Unbeknownst to Una, her ancestors were the Forsaken, immortals who were cast out for the crime of a jealous vampire general.

Liam, an outcast among the dragon clans, has spent centuries seeking the one who condemned him for a crime he did not commit. When he comes face to face with Una, he must make a difficult choice - seek revenge or save a pure heart from the darkness threatening their worlds.

The dragon warrior and the human girl will unite to face enemies they've never experienced as a fallen vampire general's army stalks them. As Una gains strength, her immortal gifts are returned and she becomes a threat to the imprisoned general who's seeking power over the immortal world. He can't afford to let Una survive, because her life will ultimately cost him his.

Together, Liam and Una must fight their way back to the vampire world and the safety offered by her sister. Can love survive amid the treachery and danger, or has Liam finally found his mate only to lose her to the evil plaguing their worlds?

"Do not dawdle, Una, our time grows short." Harsh, bitter, Anagor's voice scraped along her nerves as she hurried through the stone corridor. Stale air and dust sat in her throat, gagging her as she scurried among the debris. The sound of claws on stone sent shivers up her spine as some unseen vermin darted from her path. The heavy cloak she wore hid the shimmering fabric of her priestess robes but did little to battle the cold soaking through to her flesh.
"'Tis cold, this place we are being sent." Una shivered and ducked beneath a heavy beam. Her hand pressed against the icy stone as she struggled to maintain her balance on the uneven ground.
"You may think so."
Anagor's sneer pricked at the ready temper she'd struggled to control. Biting her lip, she kept the sharp retort to herself. She glanced up, her gaze falling on the thick wooden door Anagor stood before. He grinned as he gripped the handle and pulled. Dust and pebbles rained down as it creaked and groaned in protest before scraping along the ground to open. Shock ripped through Una as the pale streak of light spread along the frozen ground, wrapping around her with its icy chill.
Snow slapped at the ground, swirling in a maelstrom of white. It blew through the portal into the opening, piling around her sandal clad feet. Teeth chattering, she rubbed at her arms as Anagor stepped back, reaching for her cloak, all but shoving her into the freezing air.
"Duty does not wait for one who whines," he snapped, his grip tightening around her arm.
Bitter winds lashed at her dress, whipping the fabric around her legs. Her cheeks and toes burned, and fog formed in front of her with every breath. Her skin tightened, prickles of heat dancing along the surface. Wrapping her arms around herself, she fought to ward off the chill even as she felt it sinking deeper into her skin.
"My lord, I would hurry, but this wind…it is so cold, I fear I'll freeze."
"Nonsense. Amuliana would not send you forth to freeze. You have served her well."
Una stumbled, her hand catching at Anagor. Pain ripped through her, shredding her heart as she wavered, yet it wasn't her pain. Rather, it was his. His pale eyes stared at her, hate stirring in them, along with something else. Something terrifying.
Backing away from him, Una trembled. Her fingers clutched at her clothes, wrapping them tighter around her. Each step back she took, he advanced two, his eyes fastened on her throat. He grinned, a merciless expression which revealed blackened nubs for teeth and puss filled gums.
"What is this?" Una swallowed, the rising fear pushing any thought but escape from her mind.
"My penance has waited too long, Una. I will have what I seek this night." Anagor licked his lips, his eyes darkening with hunger.

Born in Northern British Columbia, Elise is a small-town girl. She writes in a variety of genres including paranormal, contemporary suspense, m/m in various lengths. Currently, she lives in British Columbia with her husband and son, one dog, one cat, and a gecko. Elise enjoys reading as much as she does writing, with some of her favorite books being read until they fall apart.
She is currently working on the next book in the Forsaken Series, Burning Rain. As well she has a new contemporary she’s working on. For more information on Elise, or to check out her books you can find her on Facebook, twitter, and her website.