Prisoner of Yakutsk by Shreyas Bhave 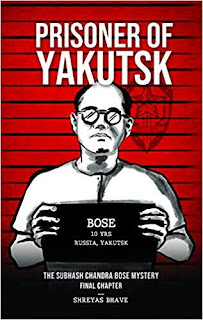 • In 1945, Netaji Subhash Chandra Bose, Leader of the INA leaves Singapore to take a series of flights, and dies in Taiwan after his plane crashes near Formosa. Or so it seems.
• In 1947, Mr Mrs Singh, an illustrious army couple, both veterans of the Indian National Army, are last seen in Delhi, and then never again.
• In 1949, the plane carrying the first deputy Prime Minister of India, Sardar Vallabhai Patel, mysteriously disappears for seven hours.
• In 2012, following the fall of WikiLeaks, a female hacker of the notorious X group is on the run as most wanted by everyone from Interpol to the KGB
• In 2015, the millionaire CEO of a Fortune 500 company suddenly resigns and vanishes from the public eye.

A set of seemingly unconnected disappearances emerge to be woven into a single fabric as the answer to one leads to another… In this riveting narrative, bestselling author Shreyas Bhave, takes the reader on a thrilling adventure to solve the greatest mystery the Indian nation has known.

Colonel Hardy looked at his wristwatch. It was almost time for the Court Marshall to begin. But then there were so many trials squeezed into one day that it was natural for his colleagues to be late for this one. He decided to start without them. “So, born in Lahore, eh?” he asked, eyes still on the files.
“Born and brought up there, Sir,” Major Singh replied. “I graduated from Government College, Lahore, and then sat for the Military Entrance Exam, passing which, I went to the Indian Military Academy at Dehra Doon.” Major Singh’s English was impeccable.
“Which year batch was it? “Hardy asked, impressed by the Punjabi’s resume. He himself was an alumnus of the same institute, though a few years junior to this man.
“1936.”
“Good.” Colonel Hardy gnawed his lower lip. So the Punjabi Major was his senior by almost half a decade.
“I was commissioned as Second Lieutenant on the Special List in early 1939,” Singh said, standing straight in the dock. “2nd Battalion. The Highlanders!”
“Secunderabad, right?”
“Indeed. A boring year until we were sent to the Far East to hold a garrison in a quaint little British port.”
Colonel Hardy read further. “Singapore, huh.”
“The war was soon to come.”
Hardy smiled as he went through the war records in the files. “I see one promotion after another. In less than six months, you were Acting Captain.”
“I served with distinction. Your army promotes on talent alone; I’ll give you that.” Singh bowed.
Colonel Hardy closed the files and looked up. “Japanese prisoner-of-war in Malaya, 1941 – what happened?”
“I was captured in Malaya.” Singh twisted his thick mustache. “I had taken my regiment on a midnight raid on the Japanese docking station on the island of Java.”

About the Author:
Shreyas Bhave's love for history since his childhood prompted him to write his take on the story of Asoka who was one of the towering figures in the history of India, which has been taken up as ‘The Asoka Trilogy’ by Leadstart Publishing. The first part of the trilogy called ‘The Prince of Patliputra’ has been published in January 2016 and the second part called 'Storm From Taxila' was published in 2018.