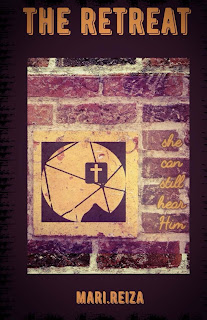 An uncomfortable but fascinating ripening journey.
Ahmed has abandoned her. Nadia is gone the way Isabelle did before, her two fallen warriors. But Marie can still hear His voice clearly.
A deep call for justice takes hold in an impressionable teenage girl from a recently broken family during a religious retreat; what happens next will mark her life for years to come.
the Retreat is a story of men playing God, of hurt that doesn’t find its way out.


Find it on Amazon

After a few long minutes, the gentle voice is carried in the steam again. ‘Do you believe He can talk to you?’
Marie feels lured, tries hard not to be hypnotised by the young woman’s voice.
‘Do you think He can tell you what to do?’
Marie shrugs.
‘I don’t know about things anymore,’ admits Nadia, and her expression sounds burdened, chagrined with something she’s unable to speak of nor hide any longer. Next, she takes a sponge by the side of her leg and starts vigorously rubbing her naked body, from her hips down, almost in punishment.
Marie closes her eyes and leans against the wall.
‘Are you studying in London? Do you like it?’ Nadia has stopped her scrubbing, arrested it at her toes, but her nude body is still bent forward like a contortionist’s over the bench, looking exposed and unguarded.
‘I’m not much of a student,’ Marie confesses. She should warn Nadia, she too comes with her own madness, a birdcage in her head. But she says nothing. ‘London is better than Paris.’ She’s not even from Paris but will leave it at that. On n’attrape pas les mouches avec le vinaigre (you won’t trap flies with vinegar), she tells herself.
When Nadia extends her hand to offer Marie the sponge, she feels only mildly conflicted. In fact, she’s eager to let Nadia move straight in like an invading peacekeeper force. ‘If you are interested in yellow, tulips have arrived,’ she wants to sing to her welcomingly. Nothing happens to Marie anymore, and if it’s to be like this forever, she’s not sure she will be able to endure it. Plus she has never been very punctilious when it comes to personal health anyway; she’s hardly a dedicated destroyer of filth and germs living up to strict standards of sanitation; she’ll happily take that sponge and rub it all over herself. Yet she wonders, for a second, what it all means to Nadia, as the woman assaults the fortress of Marie’s heart; they know nothing about each other.
Despite that fact, Marie can’t help feeling utterly corruptible against any sane logic.
Nadia must read Marie’s thoughts and approaches her, ready to scrub Marie’s back herself. ‘Sisters do it where I come from,’ she assures her.
Marie gives in without reproach, lets the unknown young woman rub her back as if it were her own, both set to open folding doors to their bodies that will allow them to enter one another, as if they were twins, miniature replicas able to play each other’s roles, live each other’s lives, despite having only just met.
Why should she say no to her nude body bruising under a sponge in Nadia’s four-fingered right hand (she hasn’t asked about that), her feet pressed over the bench? What would she be waiting for before saying yes?

If the book interests you, you can request for a REVIEW COPY in exchange for an honest review.

About the Author:
Mari.Reiza was born in Madrid in 1973. She has worked as an investment research writer and management consultant for twenty years in London. She studied at Oxford University and lives off Portobello Road with her husband and child.