Quest of Fire: The Gathering Dark

Check out my stop on the Quest of Fire: The Gathering Dark blog tour! 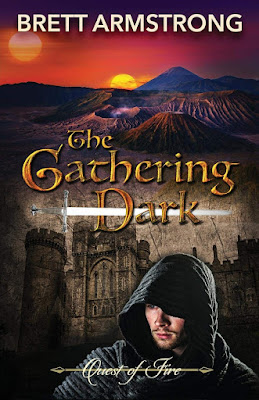 Jason is an expert at running from his past. When it catches up, he finds himself hiding in a peculiar inn listening to a tale from centuries past.

The story is Anargen's, a teen who is pulled from all he loves to follow his oaths of loyalty to the fabled King of the Realms. Together with his mentor, Cinaed, he rides north on a special quest to mediate peace talks between ancient foes--the men of Ecthelowall and the dwarfs of Ordumair. Nothing goes as planned. Many on both sides of the dispute despise Anargen's Order. Worse, an arcane evil has returned to the North. This "Grey Scourge" seeks to ruin the peace talks and ensure a lost treasure held by the dwarfs is never found by those for whom it is meant.

As Anargen's story unfolds, Jason begins to wonder whether it is truly just a fable. He soon finds himself drawn into the conflict Anargen faced--a battle which has shaped and can destroy his world.

The romance between Anargen and Seren is one of young love. That love, somewhat tragic, becomes an important part of the events that shape Anargen’s world.
-----------------------------------Start of Excerpt-----------------------------------------------------------------------------------
Twigs snapped underfoot as Anargen strode through the forest. Normally he tried to be quieter, but night had fallen, and he was not alone.
"Are you sure this is the way?" Seren asked, glancing back the way they’d come.
Anargen just grinned. The woods around Black River tended to be dense. Most of its paths were just deer trails. For the uninitiated, they would seem labyrinthine. “Absolutely. My father has taken me through here often. Have some faith.”
She reached out and gave his hand a squeeze. “If there are any who wander without being lost, I’m sure it is you. Lead the way.”
It was nice being able to show her something for a change. “Okay, stay close. We’ll be coming up on the river bank soon. Watch out for roots too, they’ll trip you up.”
“Oh, I see. Don’t want to fall in. With all that coal on the bottom, the river is dark enough during the day.”
“The current isn’t very fast, but it’s definitely not how you want this night to end.” He laughed.
“How do you want this night to end?” she asked, innocence in her voice.
Honestly, he didn’t want it to end, ever. “Any way except returning you home sopping wet. I’m sure your mother is grateful for the tools, but that would probably ruin me in her eyes.”
“Oh, no it wouldn’t. It couldn’t undo all that good. The craftsmanship was impressive. You’re more a blacksmith than you admit.”
“Ha! From the look of shock on Arnauld’s face when I’d finished, you’d think I’m never in that shop.” Anargen half-turned and imitated the expression. Something close to how a rock would look surprised.
“Well, you really aren’t there often,” she pointed out chuckling. “Didn’t you even leave early today to bring the tools?”
“Yes, but really it was you who suggested I show you these woods. So, I think it might be you who kept me from returning to my duties.”
“Oh,” she huffed in mock fluster and gave him a shove. As she did, she pitched forward suddenly with a squeal of surprise.
Anargen spun and caught her. For a few seconds, he held her like that, his heart racing, ready to catch her many times over. He helped her back to steady footing. Though not with any haste, he enjoyed the closeness more than was proper.
“Thank you,” she whispered.
“My pleasure.” Feeling his awkward nature strangling him for what to do or say next, he cleared his throat. “Like I said, watch out for roots.”
A smirk crept up on Seren’s lips. “Duly noted.” Linking her arm in his, she laid her head against him and said, “Though it’s probably best I stay close.”
“I agree,” he replied. Against his will, his heartbeat raced faster. It wouldn’t be so embarrassing were Seren’s ear not so near to hear the change. Strangely, the rhythm calmed considerably after a minute or so more walking with her. There was something so easy about it. Soothing.
He needed it with the maelstrom of abnormal happenings this week. All day he’d dreaded Sir Cinaed showing up, or worse his strange little visitor. Seren made all of it seem so far away.
By the time they reached the water’s edge, it had to be an hour till midnight. “Here we are,” he said gesturing to a small jetty. “The best place to view the stars in Walhonde.”
From the way Seren’s mouth hung open, eyes wide, he knew she agreed. The river was wide here and the already dark waters were as deep an indigo as the sky above. In the gentle current it reflected all the starry host above. Fireflies blinked in and out of existence among the trees of the opposite shore and hovered near enough to touch. Standing on the dock, it appeared the stars were all around them.
“You never see anything like this in Stormridge,” she murmured.
“You never see anything like this anywhere,” he wanted to say. But he could sooner move a mountain than speak so freely. “Really? Didn’t you see the stars there?”
“Well, of course. But not like this. Not half of this,” she said as he helped her sit down on the weathered boards.
Dropping down beside her, he slipped his feet in the water next to hers. “Do you see any stars you recognize from there?”
After a few seconds, she nodded and pointed to the right. “That group is known as Bellafortis the Gryphon. And a little bit below is Dolosus the Wyvern. The two are supposed to be always locked in battle. ‘Valor and deceit, war without respite, Battle of all souls, mirroring their strife.’”
Anargen raised his brows and Seren blushed. “It’s something a poet from home wrote about them. It’s much longer but that’s the part I remember best. Though the myth actually comes from Ecthelowall, not Stormridge. It’s tied to their ancient line of monarchs somehow. A lot of the fabric of Libertias’s society is still very much . . .”
She splashed some water at him, “Anargen, are you listening?”
“Oh, yes. I’m sorry,” Anargen replied. In truth, he was only half aware of what she’d said. Her poetry and the beauty of being with her here had distracted him. It was clear from her eyes. She’d fallen down the same hole into a new, other-world as him.
Amidst the gentle thrum of summer’s night-pulse, he snuck another lingering kiss. In it he needn’t keep wondering whether he had taken the dive so much sooner than her after all.

About the Author
I'm a Christian, a writer, a full-time programmer, a husband, a dad, and quite often sleep-deprived. Not necessarily ranked in order of importance, except #1.