The Treasure Syndicate by Jatin Kuberkar 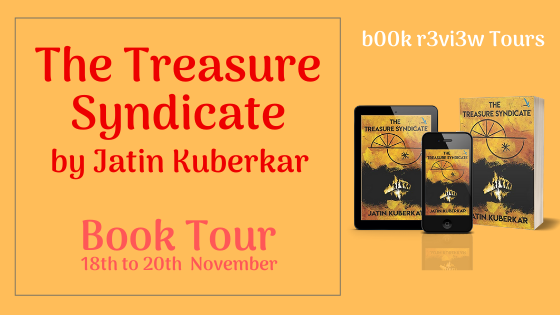 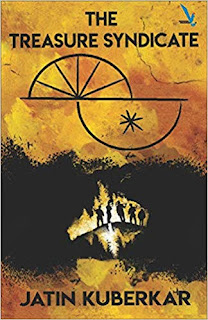 It happened at the dawn of Kaliyug when demon Kali resolved to enter Aryavarta and encountered the last Pandav king. A curse, followed by a blissful enlightenment gave the world its first ‘Nidhi-Palak’ or The Guardian of Treasure Troves in the form of Lord Kuber’s mortal son, Suta. The lineage of Suta has expanded with time and the Guardians have spread all over the world.
Children born under the Guardian lineage possess extraordinary talents. They are deeply connected with the universe and have special abilities to identify treasure trove. They often live a normal life but behind the scenes, they work as catalysts in the gargantuan task of Lok-Kalyan by excavating treasures. Acharya Neelkanth Agnihotri is a committed Guardian. To the world, he is an astrologer, but that is only a garb under which he searches for hidden treasures.
Bound by a complicated framework of coincidence, destiny and fate, the Treasure Syndicate is always a team of five; A destined personification of Knowledge, Wealth, Luck, Skill and Balance. Mahesh is a doctor by profession but he secretly finances missions for Acharya, Kumar is a taxi driver but he seems to be unusually ‘lucky’, Jabbar belongs to a family of legendary diggers and Srikanth is just a common man.
Real time treasure hunting is not a cake walk. There are no keys, no pointers, no maps or puzzles to solve, yet the conditions are never favorable. The trove in question is located under a century old house at a locality called Patthar Galli which has recently become a political hotpot. The syndicate’s record itself is filled with failures and a haunting past is their biggest enemy.
In a mysterious turn of events, Acharya, Jabbar and Kumar are jailed, and the said treasure is GONE!


Acharya Neelkanth Agnihotri, commonly called, Acharya, is the leader of the treasure syndicate. He is old and wise and is a gifted with the knowledge of ages. He carries with him an ancient legacy that is alive since the time the Kaliyug set its firm foot on the earth.
An astrologer by profession, Acharya searches for traces of hidden treasure under the garb. He has a painful past but is committed to fulfil his destiny.
1. If you had a free day with no responsibilities and your only mission was to enjoy yourself, what would you do?
Acharya would spend the day with the baggage of his family legacy and re-read the literature left behind by them. He would love to consolidate the information about treasure hunting while listening to golden oldies sung by his wife, Sumati, while she cooked delicious food for him!
Almost by dusk, he would lay down in the courtyard gazing at the crimson sky, remembering his son and the last conversation they had. This would go on until he’d fall asleep and continue to peer across the boundaries of space and time into a mystical land of intrigue.

2. If you could spend the day with someone you admire (living or dead or imaginary), who would you pick?
None other than his loving wife Sumati. Acharya would spend time listening to her songs. He loves her immensely and the feeling is mutual.

3. What is your idea of perfect happiness? And, what is your current state of mind?
Acharya’s idea of perfect happiness is to unearth more treasure and serve in the gargantuan task of lok-kalyan. Nothing makes him happier than the fit (a mystic attack of epilepsy) he’d get when he had found a trace of hidden treasure. Acharya is always in a state of Bliss. He knows exactly how the things are going to unfold but only anxious of the outcome. He is a mixed bag of emotions and unpredictable in his reactions.

4. What do you consider to be the most overrated virtue and why?
Acharya is a man of Virtue, but he is not judgmental. He’d laugh at this question and probably pull out a joke on which only he’d laugh and duck from answering it 😊

5. Tell us 3 things about yourself that the readers do not know about.
1. Acharya is as scared as a boy at the thought of losing his identity as a guardian or not fulfilling his destiny.
2. Acharya has a secret past where he was not true to his motives and motivations. It is because of this, that he has lost his son and daughter-in-law. He is aware of this and repents.
3. From the time he had met Srikanth, Acharya was aware that was special and different. But, he is too perfect to figure out how or in what way is he different/special! 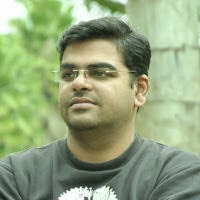 For the mortal world, I pretend to be a Software Engineer who works hard (or hardly?) in the hours of a day. I am the guy next door, a hard core Harry Potter fan and a movie buff. I literally ‘live’ every movie, I have strong opinions about its content and I hate it when a movie based on an interesting concept is messed up for the sake of commercial value. I enjoy watching cartoon shows (doremon, dora and Choota Bheem) with my son. I never get bored of listen to the endless chatter of my wife. When I’m not writing, I make toys for children.
But beyond the boundaries of this ‘cholesterol rich’ coil, I am a rider of rapturous thoughts. I am a thinker, a philosopher, a seeker, a story-teller, a writer, a wanderer and every other thing that a thought can be. At times some of these figments fire out of my thoughtful bowl and command me to write, muse, create, recreate, destroy…EXPRESS!
Who Am I? I have been asking this question to myself since 33 years, and I got a different answer always. Sometimes I get confused and think, am I asking the right question to seek the correct answer? or may be that am I missing the  whole fantastic universal drama around me while I am busy finding an answer to an irrelevant question?
Does the answer even matter?