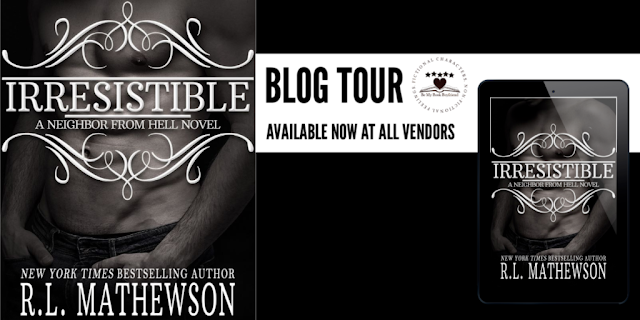 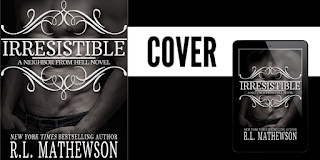 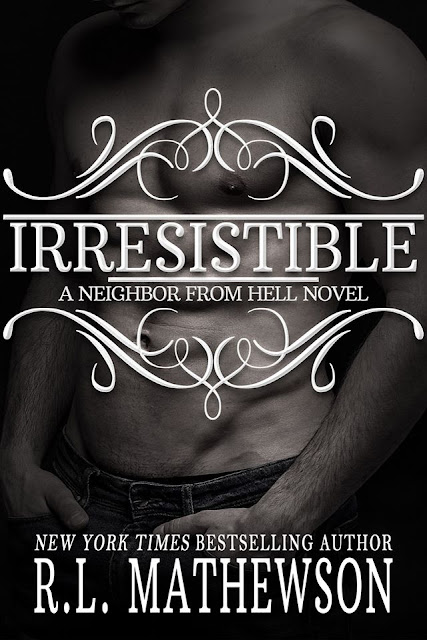 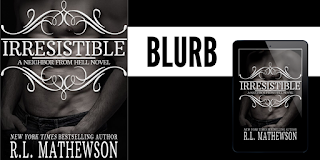 From bestselling author R.L. Mathewson comes the long-awaited Neighbor from Hell Novel…Irresistible.There weren’t many things that Aidan regretted, but that night he’d spent with the woman that he couldn’t stop thinking about was definitely one of them. He’d always been careful, always did the right thing, and now…Now he had to figure out a way to fix this before it was too late.Melanie still couldn’t figure out how one night could change the rest of her life. She should have done a lot of things differently that night, she should have turned him down, should have spent the rest of the night wallowing in self-pity, but that’s not what happened and now, she needed to figure out how she was going to survive this pregnancy with a Bradford doing everything in his power to make her fall in love with him. 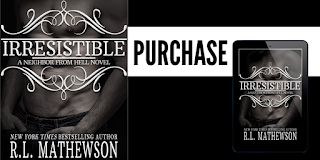 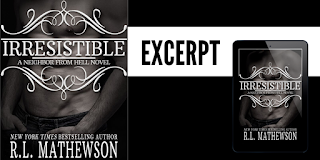 “Aidan?”
“Hmm?” he murmured as he scrolled through his emails, forwarded some to his secretary, deleted some, flagged others all while debating running out to get some fresh prunes to add to Melanie’s breakfast and grabbing some pancakes and eggs for himself.
Christ, he could go for some pancakes.
And home fries.
Maybe some bacon.
“Aidan?”
“Yeah?” he asked, double-checking his schedule to make sure that there weren’t any last-minute patients added to his day.
“I don’t want oatmeal.”
“It’s good for the baby,” Aidan said absently, forwarding an email to his father, who wasn’t talking to him at the moment and-
“I’m going to say this once and only once,” Melanie said as she wrapped her small hand around his tie and gave it a tug so that they were almost eye to eye. “Do not come between me and my food or I will hurt you.”
“I-”
“I will hurt you, Aidan. If you shove one more baby carrot or freaking plain, fat-free yogurt at me, I will tear you apart with my bare hands,” she bit out with a glare that told him that she’d start with his balls.
“I-”
“I’m not one of your patients,” she informed him.
“I-”
“So, stop treating me like one,” Melanie said before abruptly releasing his tie, turning around and waddling towards the bed only to pause to give the tray of fresh veggies that he’d left for her a look that made his balls pull up tightly in fear before climbing back into bed, curling up on her side and glaring at him with a look that dared him to offer her another baby carrot.
He opened his mouth to point out that she needed a wide variety of fruits and vegetables during her pregnancy, but the look she was giving him had him quickly shutting his mouth and clearing his throat. “What can I get for you?”
In seconds, the glare was gone and in its place was that beautiful, sweet smile that had knocked him on his ass the first time around.
Oh, fuck no…
“I could really use a Bradford Special from the Fire & Brimstone,” Melanie said while he nodded in agreement because he could definitely use one of those as well. New York Times Bestselling author, R.L. Mathewson was born Massachusetts. She’s known for her humor, quick wit and ability to write relatable characters. She currently has several paranormal and contemporary romance series published including the Neighbor from Hell series. Growing up, R.L. Mathewson was a painfully shy bookworm. After high school she attended college, worked as a bellhop, fast food cook, and a museum worker until she decided to take an EMT course. Working as an EMT helped her get over her shyness as well as left her with some fond memories and some rather disturbing ones that from time to time show up in one of her books.Today, R.L. Mathewson is the single mother of two children that keep her on her toes. She has a bit of a romance novel addiction as well as a major hot chocolate addiction and on a perfect day, she combines the two. 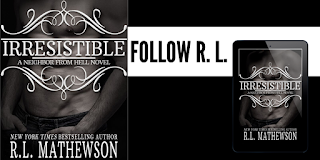