A Barren Heart by Shilpa Suraj

A Barren Heart by Shilpa Suraj 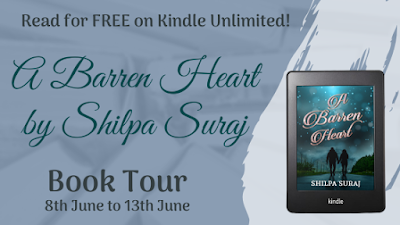 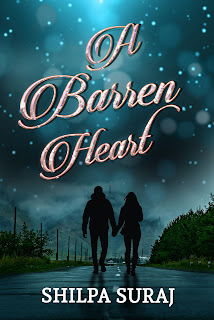 When having it all isn’t enough…


Aman and Rhea seem to have the perfect marriage. They are madly in love - with each other, with their own careers and the home and life they are building in a quiet Mumbai suburb.
Rhea is a successful interior designer with a thriving business while Aman is a commercial pilot who is at peace with his life, on the ground and in the skies! What could possibly be lacking in their picture-perfect marriage?

Like most women, thirty plus Rhea Chakraborty, wants to hold her own flesh and blood in her arms. And Aman too wants the same.

After another unexplained miscarriage that takes a severe emotional, physical, and psychological toll on them, Aman isn't sure if having a baby will complete them or destroy them.
Suddenly, Rhea and Aman find the fabric of their stable marriage fraying beneath the strain of their failed conceptions. Where once they were a team with a common goal, they now find themselves on opposite sides with shifting goalposts.

A Barren Heart is set in so-called modern India and is the story of the struggle of an affluent, educated couple who are still fighting the shackles of societal indoctrination and expectations and losing each other in the process.

Read an Excerpt from A Barren Heart


“I’m sorry. There’s no heartbeat.”
Rhea’s smile faded slowly. Confused, she looked up at the doctor but couldn’t read anything in her perpetually grumpy face.
The hard probe between her legs was withdrawn abruptly leaving a cold vacuum behind. Icy gel smeared the insides of her thighs leaving her feeling dirty and exposed even though a sheet covered the naked, lower half of her body.
The doctor hadn’t spoken since and was busy scribbling something in Rhea’s file. Rhea cleared her throat. The lady didn’t bother looking up from the file. She finished writing and handed the file to the nurse.
“We’ll scan again in two weeks for a viable pregnancy. You can go see the doctor now with the report.”
“What do you mean by that? Scan for a viable pregnancy? Am I not pregnant now? My pregnancy tests were positive.”
All she got was a pointed glare. “The doctor will answer all your questions.”
“If I have so many scans, will it affect the baby in any way?” Rhea had to ask. She couldn’t help herself. Anxiety and panic had her pulse thrumming.
“It’s not a baby until there is a heartbeat.”
Rhea’s head spun, the room doing a slow revolve. The nurse handed her a bunch of tissues, oblivious or uncaring of her turmoil. Rhea pulled herself into a sitting position and took them. Wiping herself, she pulled on her clothes slowly and made her way out of the scanning room, the file clutched to her heart.
Aman looked up the minute she stepped out of the room. A big smile split his face as he reached for the file.
“How was it? All okay?” His excitement caused her hands to shake, the file fluttering from her grasp to the floor.
Startled, Aman ignored the mess of papers at his feet and instead, hauled her into a tight embrace.
“What’s wrong, hon?”
The endearment had her tightening her hold on him. Aman was the love of her life, her rock, the stable foundation to her forever tumultuous world. Even as she held him, she felt his strength, his calm seep into her and steady her.
She said, “I’m not sure. I don’t know. The doctor inside wasn’t very clear.”
“What did she say?” Aman led her to an empty seat in the crowded waiting area.
“She said there’s no heartbeat.” Ignoring the tremor in her own voice, Rhea forced herself to keep talking. “We have to come back in two weeks to check for a viable pregnancy, whatever that means.”
Aman’s grip tightened on her hand. “Let’s go see what Dr. Vashisht has to say alright? Don’t jump to any conclusions before that.”
Rhea nodded. Yes. That was smart. She watched as he walked over to the nurse in charge and handed over her file. She heard him murmur Rhea Chakraborty, wife of Capt. Aman Gill, to the harassed looking lady.
She turned slightly away so that he couldn’t see what she was doing. Pulling out her phone, she quickly went to her one stop for everything search engine. Fingers flying, she typed, ‘six weeks pregnant no heartbeat’ and waited, heart pounding. In less than a second, the results flooded her screen.
She was still scanning them when Aman came back and sat down beside her. He took her hand and cradled it against his chest. Too caught up in what she was reading, Rhea pulled hers back immediately and pointed at the screen.
“Look at this,” she said, excitedly. “There are a ton of results about people who didn’t hear a heartbeat in the first scan but did in the second one two weeks later.”
Aman sighed. “I thought we were going to wait to hear what the doctor has to say.”
“Yes, of course,” she brushed his concern aside. “And Aman, I have none of the other worrying signs of…” She couldn’t say the word. She wasn’t even going to think it. “Of things not being okay. No bleeding, no pain, nothing. I feel great. This is good, right? There’s hope?” The last word held a wealth of uncertainty as she looked at him. “Right?”
Aman’s face softened. “Yes, there’s hope. There’s always hope.”
“That grumpy, old woman inside just frightened me for nothing. I bet we will hear our baby’s heartbeat in the next scan. Loud and strong.” Rhea was bouncing in her seat now, her earlier excitement resurfacing.
“Rhea,” Aman started to say something and then stopped at the unspoken plea on his wife’s face. “Of course,” he said, finally. “I can’t wait to hear it.”
“Loud and strong.”
“Loud and strong,” he affirmed, a silent prayer winging its way from his heart to the heavens above.
But when they came back two weeks later, there was only silence.

An avid reader with an overactive imagination, Shilpa has weaved stories in her head since she was a child. Her previous stints at Google, in an ad agency and as an entrepreneur provide colour to her present day stories, both fiction and non-fiction.