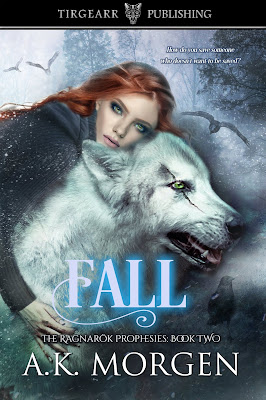 
How do you save someone who doesn't want to be saved?

Those called to stand guard against the end are broken, and Sköll and Hati run free. Now Arionna Jacobs and Dace Matthews face a threat unlike any before. Ragnarök is coming and they aren't strong enough to stop it.

Arionna thought she understood sacrifice, but she never counted on her destiny tearing Dace apart. Ever since she nearly died, he has been consumed with guilt. Now it threatens to turn him into the monster he always feared.

It's up to Arionna to stop him before it's too late, but the path to hell is paved with good intentions, and Dace is hurtling toward self-destruction. This time, Arionna isn't sure she can save him from himself.

Can she convince him to let the past go, or is her true destiny to sacrifice her heart in exchange for the lives of the people she loves?

Dace nuzzled his cold face into my neck, planting little kisses everywhere he could reach.

Happy. I tilted my head to the side to allow him better access to my neck. I loved when he kissed me like this. Like he couldn't be this close to me without having his hands and lips on me.

I am happy. You make me happy.

Gage leaned down to whisper something to Chelle. She looked out over the field, frowned, and then whispered something back to him, too low for me to hear. Gage responded, causing her to shake her head. Her frown deepened.

I followed her gaze with mine and had to bite back the urge to groan.

Ronan stood across the quad, his long hair blowing in the brisk wind.

Why is he here?

I asked him to come, Dace said.

"Why?" I demanded aloud.

Some of the girls around us turned in my direction.

"Shit," I cursed under my breath. I would remind everyone I was within gawking distance. I arched a brow in a pointed, unspoken request.

They hurriedly averted their gazes, opting instead to cast furtive glances over their shoulders at us.

I closed my eyes and leaned back into him again, doing my best to ignore the renewed interest of my former classmates. They weren't only curious about me. They were just as curious about Dace, the gorgeous TA who had never dated a student before me. Didn't help, though. I didn't like the attention.

To help keep an eye on things.

Dace sucked at lying. Or maybe I'd gotten better at picking up on the things he didn't say. Whatever the case, he wasn't being honest with me. I heard it in the half-second pause before he answered. Felt it in the way his body tensed for a moment before he relaxed again.

You're not telling the whole truth, either.

Geri? I pushed my thoughts out toward the wolf. If he knew what Dace was plotting, he'd fill me in. Wolves didn't keep secrets.

Dammit, Arionna. Dace nipped gently at my skin with his teeth, a little punishment for defying him, and a little reward for defying him. The boy was nothing if not complicated.

"Tell me," I said, turning my face into his.

He's here to see if he can root out Sköll or Hati.

I froze, my heart jumping.

We don't know if they're here, Dace said, trying to ease my mind.

He didn't know for sure, but he suspected the demon wolves were here. And why wouldn't he? Whoever they were, they knew where he worked, where I went to school. They knew exactly where to find us the day they attacked, right down to our schedules. Of course, they were here somewhere. What I didn't understand was why Dace was here.

If he expected Sköll and Hati to show up, why did he willingly let me, Chelle, and Beth come here?

Because you're safe here.

I won't let anything happen to you again.

I sighed, things beginning to fall into place in my mind.

Dace wouldn't let any of us leave the house without a guard, but he had no such qualms about putting Ronan in danger. Sköll and Hati had to know Dace would be too busy keeping an eye on me, Chelle, and Beth to spare any attention for anyone else today. No one would be watching Ronan's back, making him an easy target. All the twin wolves had to do was separate him from the crowd, and no one would ever know.

That's why we were really here today. Not because we needed a break or because Dace was actually trying, but for this. So Ronan could do what Dace wouldn't let me do and act as bait.

We couldn't even get away from the apocalypse for a single afternoon.

Previous book in the series (click on image for Goodreads link); About the Author
A.K. Morgen is the Amazon Bestselling author of the Ragnarök Prophesies series. She lives in the heart of Arkansas with her childhood sweetheart/husband of sixteen years and their furry minions. When not writing, she spends her time hiking, reading, volunteering, causing mischief, and building a Spork army.

She puts her education to use as a 911 Dispatch Supervisor, where she's responsible for leading a team of dispatchers as they watch over police, EMS, and firefighters for her county.

Ayden also writes steamy romantic suspense under the penname Ayden K. Morgen. You can visit her online at http://akmorgen.com or at the links below.