New Witch on the Block by Louisa West 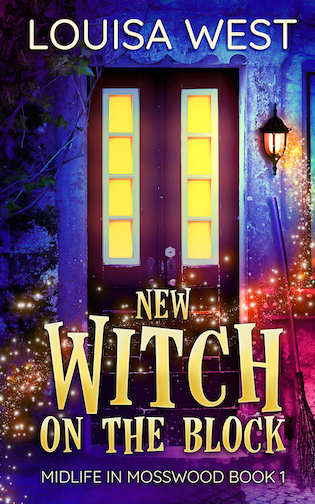 She thought she was running away from her past, not catching up with it.
Rosemary Bell just wants to live a quiet, happy life and raise her daughter as far away from her toxic ex-husband as she can get. But when they move into a decrepit cottage in the woods of Mosswood, Georgia, Rosie realizes her life will never be simple.
A gang of meddling neighborhood do-gooders want to run her out of town. The vicious laundromat machines keep eating her spare change. Not to mention her buff Irish stalker who insists that he’s a Witch King and that it’s her royal destiny to be his Queen.
And to top it all off, strange things keep happening around Rosie when she least expects it…
She could deal with it all, but her ex won’t rest until he tracks her down. When her ability to protect her daughter is threatened, Rosie shows them all that nobody messes with the new witch on the block.
Practical Magic meets Bridget Jones’ Diary in this fun, heart-warming short novel about starting over, putting family first, and finding love when you least expect it.

Goodreads / Amazon
—
EXCERPT:
Surprisingly, her mind settled on men. It had been twenty-two years since she had been single, and at least twenty since Randy had started policing where her eyes lingered. It had been a long damn time since she’d had a man make her feel… well—anything, other than revulsion. So, alone in her bathtub, she allowed her thoughts to go where they willed.
Like to the dimple in Ben’s left cheek when he had smiled at her that afternoon. Ben was cinnamon-spiced apple pie, with a generous serving of cream. Comforting, clean-cut. Wholesome.
If Ben was apple pie, then Randy was wilted bitter greens. Hard to swallow, and no matter how much you tolerated, it didn’t ever seem like there was less of it on your plate.
Declan was something else altogether. She replayed the way he’d swooped her up in his arms like she was as light as a dried leaf. She remembered the strength in his grip when he’d held her on the playground. He was full-bodied whiskey, with a hint of chili powder.
A deep exhale escaped her at the thought. She slid her hands over her abdomen, suds skimming down her legs as the candlelight cast enchanting shadows across the scene.
And then she was in the dark.
Rosie froze before realizing that the breeze must have snuffed out her candle. She sighed into the darkness, not wanting to break the spell she had been under and get out of the bath yet.
She explored her body like it was a city she’d once known well but had lost her way in recently. Strangely, her touch didn’t feel like her own touch. Her hands felt somehow larger and rougher, even though that was impossible. Her mind focused on a crooked smile, smoky jade green eyes, and a head of shaggy ginger hair that she longed to pull.
When her release came, she felt like she was coming alive again. All the tension of the past few years—leaving Randy, worrying for her daughter and herself—melted into a mellowness that she’d never known. She sighed again, but it was a lighter and more contented sound than before. Rosie ran her hands through the cooling water and then up over her face. The sensation was liberating, and she felt more like herself than she had for decades.
And when Rosie opened her eyes, the candle was burning once more. 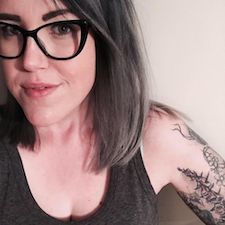 Author Bio:
Author by day, Netflix connoisseur by night.
Louisa likes Pina Coladas and gettin’ caught in the rain. Determined to empty her brain of stories, she writes across several genres including fantasy, speculative fiction, contemporary and historical fiction, and romance.
She lives in Mandurah, Western Australia, and drinks more coffee than is good for her. When she’s not writing or researching projects, Louisa enjoys spending time with her family, and Harriet The Great (Dane). Hobbies include playing video games, watching copious amounts of tv, and various craft-related initiatives.
She strongly believes that the truth is still out there.