Songs of Healing by R.L.S. Hoff 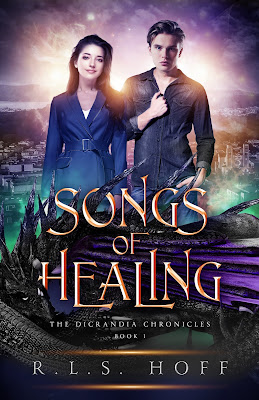 Songs of Healing
by R.L.S. Hoff
Genre: YA Fantasy
Release date: August 2020
Summary:
Once upon a time, in a world not so different from ours...The Dicrandian War and Peace parties have feuded since before the webiverse, before indoor plumbing, even before the royal family split, and the country became a constitutional monarchy. Sarah Tressarian, Peace Princess, has no problem with that. The War Royals, like Prince Philip, are all arrogant jerks bent on destroying the country.At least, that’s what she thinks until she gets to know Phil.And before monsters and fairies rise from the murk of legend to invade Dicrandia’s Northwest.Now, to bring safety, Sarah must not only relearn the magic her people have forgotten, but also do what no one has done for centuries.

never should have checked my messages before taking a free afternoon. I scowled at the note from Lady McGivern. “To sum up, your entire proposal is slip-shod, thoughtless, and overbudget, but what should I expect from the illegitimate fifteen-year-old daughter of a decrepit political dynasty?”

Stupid woman. My proposal wasn’t that bad, the Peace Party had plenty of life, and I wasn’t illegitimate. The whole country had seen the blood tests, not that it was any of their business. I took a couple of deep breaths and set my phone on “do-not-disturb.” Even that didn’t make me feel better, so I folded the device into the teen fashion magazine my mom had (erroneously) thought I might want to read and put both into the seat pocket in front of me. I hoped neither my guard nor my driver was watching me closely at that particular moment.

Neither of them said anything to me about the phone either then or when they dropped me off at the back entrance to the private half of Peace Park. I let myself in the huge wrought-iron gates, turned around, and waved. I watched the limo pull away, to make sure it left.

Then, since I’d come straight from school, I rushed to the first clearing with a decent-sized boulder, shucked off my school flats, and changed into hiking boots. Until I reached the castle-side gate of the park, two miles from where I stood, I would be alone—no servants, no guards. People somewhere tracked my movements on their map-screens and monitored me whenever I was in range of a camera, and I couldn’t leave the walled-in forest, but this was as close to private time as I ever got. I flung my arms out wide and breathed deep, soaking in the smell of new flowers and recent rain.

On my own for the first time in a month, I laughed and spun in a circle until I was so dizzy I tumbled to the ground, hard enough to scrape my hands.

Sure, it was childish. Who cared? There was no one nearby to see, to tell me to act my age, or to freak about the blood trickling from my palms. I stared at the red liquid for a moment before wiping it on my skirt. Yes, I knew skirts were a bad idea in the woods, but I’d already worn pants to school three days in a row and mother insisted I swap out a skirt at least one day of every four. “No, you can’t break the rule for your afternoon off,” she’d said that morning. “If you didn’t want to wear a skirt in the park, you should have thought about that yesterday.”

Anyway, there I was, in the woods, in a now blood-stained, knee-length skirt that I couldn’t change. (I couldn’t imagine the trouble I’d be in if one of the park cameras caught me in my underwear.) Blood welled up on my right palm again. Enough of that already. I scanned the area to make certain nothing and no one was watching and hunched so that if any unseen cameras covered this spot, they wouldn’t be able to see my hands. Then I sang a tune my mom’s mom had taught me back when I was still a kid. As I sang, the scrapes on my palms grew scabby and itchy, then shiny, then whole. I stopped singing and stared at my hands. No sign remained of my fall except a bit of dirt on one palm.

No matter how many times I did this, it still felt weird. Magic. It wasn’t supposed to be real. Only maniacs and babies believed in fairy tales.

So, how could I explain my hands? 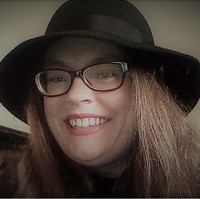 About the Author
R. L. S. Hoff grew up as a modern nomad with roots in five US states and one foreign country. She has now settled in Colorado with her three kids (one adopted, two bio), her dog, and her spectacularly supportive and brilliant husband. She writes mostly young adult sci-fi and fantasy; she edits anything that could benefit from clearer prose (but prefers to work on fiction). She also tutors students of all ages in Math, English and Conversational Mandarin.
Website: http://pencilprincessworkshop.com/
Twitter: https://twitter.com/RachelH55965605
Facebook: https://www.facebook.com/RLS-Hoff-106723167717373
GIVEAWAY:
a Rafflecopter giveaway