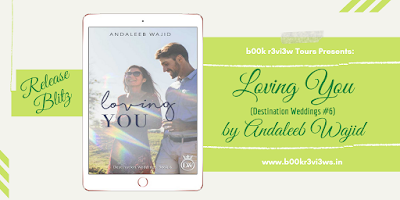 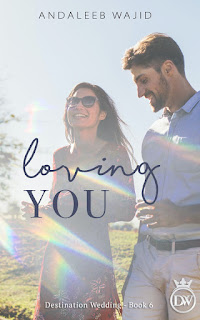 After watching his brother's disastrous love marriage fall to pieces, Hamza decides that the only marriage for him is an arranged one. In Mahrukh, his family finds him the perfect bride. But while Mahrukh may be the perfect bride, it's her divorced aunt Noorain who is the perfect woman for him.
Noorain Alam has never loved or been loved. Until the day her niece gets engaged to a man who is completely out of her reach and yet, he's everything she never knew she wanted.
Blindsided by the strength of emotion they feel for each other, Noorain and Hamza find themselves in a battle for their happiness. But will love win? Or will family and duty stand in its way? 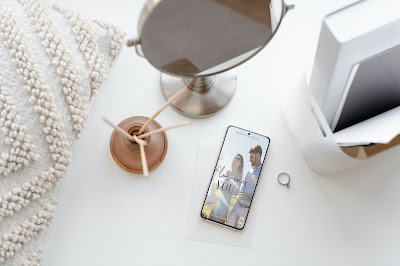 Read an Excerpt from Loving You

Ghazal turned to her husband who was driving the car and she smiled at him. ‘I’ve never done this before,’ she said. She’d never had the opportunity to go and ‘see’ a girl, a potential bride and this was a novelty for her.

Hamdaan smiled at her indulgently. ‘You seem more excited than Hamza,’ he remarked. From the back seat, Ammi tittered.

‘We’re all excited,’ she said.

‘But why? I’m just baffled,’ Hamdaan said, shrugging. Ghazal caught her mother-in-law’s gaze in the rear-view mirror and smiled.

‘Well, it’s the start of something new, right?’ she asked Hamdaan. ‘And we all want to see Hamza Bhai happy.’

Hamdaan merely shook his head as he navigated his way through the traffic. Ghazal glanced at him again and felt that deep feeling of contentment whenever she saw him. He looked at her too and smiled again. The special smile that was reserved for her and her heart felt like it was expanding in her chest.

I love you, she thought softly. And she would never tire of telling him or hearing him declare it to her. She wanted this same happiness for Hamza Bhai as well. No one would take the place of Khalil Bhai for her but Hamza came quite close, in the past six months since she and Hamdaan had got married.

‘So what happens once you see this girl?’ Hamdaan asked, looking at his mother in the rear-view mirror.

‘The usual, beta. Engagement and then wedding if we like her,’ Ammi said.

Hamdaan rolled his eyes but didn’t say anything. Ammi sighed.

‘All mothers want to see their children happy,’ she said. ‘But sometimes, you children should also think about making us happy, shouldn’t you?’

‘But what do you want me to do?’ Hamdaan asked, frowning. Ghazal looked down at her lap. Surely her mother-in-law wasn’t asking them to have children so soon. She and Hamdaan were just figuring out things with each other and she wanted some more time for them to be on their own. But thankfully, Ammi wasn’t thinking of grandchildren yet.

‘Nothing. I’m just saying that Hamza is making me very happy by agreeing to this. That’s all.’

‘But he’s not even getting to see the girl,’ Hamdaan commented.

‘We’ll show her photo to him,’ Ammi said.

‘And that’s it?’ Hamdaan asked.

Ghazal looked at her husband and shook her head. ‘If Hamza Bhai wants to meet her…’ she started. After all, she and Hamdaan had met before they got married too and it had been on Hamdaan’s insistence.

‘Well, he should,’ Hamdaan said.

‘Let’s just see the girl first,’ Ammi replied. Hamdaan nodded and drove on and finally, when they reached the apartment building, the security guard let them inside. Hamdaan parked the car in the basement, surprised that the security was letting visitors park their cars inside.

‘Oh right,’ Hamdaan said as they got out of the car. Before they had reached the stairs, there was a welcoming committee for them already – a group of women who were dressed as though for a wedding.

Ghazal looked down at her own clothes and suddenly felt a little self-conscious that she was dressed down. But so was Ammi. They both had worn sober but classy outfits with minimum jewellery. The girl’s family however seemed to think that more the bling, the better it was.

‘They all look like Christmas trees,’ Hamdaan muttered and Ghazal almost giggled. The girl’s father was waiting for Hamdaan and he met him like they were old friends, with a huge enveloping hug and led him away from there. The women, bedecked and perfumed generously, led Ghazal and Ammi towards the lift.

‘Come, come,’ a woman said. Ghazal wondered if she was the bride’s mother. She looked quite young herself, but she had the sort of deportment that indicated that she was someone important in the family.

Ghazal thought back to her own family, her parents as well as Khalil Bhai and Kimmy Bhabhi. None of them were as formal as these smiling women, she thought. And neither were they as formidable.

Silks rustled and gleamed as they got inside the lift and one of the women leaned forward and pressed the button for the penthouse. She looked at Ghazal critically and Ghazal tried hard not to be affected by all the stares that were directed to them. Ammi was smiling and talking softly to one of the women and she marvelled at how easily everyone seemed to make small talk. She could never do that for some reason.

The lift stopped and the doors opened into a luxurious carpeted apartment. The women stepped out and Ghazal followed them as they led her to one of the inner rooms and had them sit down on the sofa. She wondered if Hamdaan would be coming up here as well.

‘So that’s the groom’s twin brother?’ the earlier woman asked her, a bright smile on her face.

Ghazal nodded. She wanted to say that the similarities were only physical and that there was simply no one like her husband but she obviously couldn’t say all that.

‘Ah, he’s so handsome,’ one of the women said with a giggle.

That he is, Ghazal thought privately, fighting the smile on her face. Ammi looked around the room where they were seated and spoke.

‘We would like to see the bride,’ she said firmly.

‘Of course, of course. But first some refreshments. I’m the bride’s mother, Haniya,’ the woman said. Ghazal had been correct in her assessment. Something in her stomach churned when she realised that what they had before them was a huge responsibility. She and her mother in law were going to select a girl for Hamza Bhai, someone who would come and live in their house, become a part of their family. And the only criteria they had to select her was that she should be pretty? What if Hamza Bhai didn’t get along with her at all?

But that was a risk they had to take, she thought as other women started filing in. She wondered just how many people stayed here, and maybe the thought was apparent on her face.

‘These are my cousins and relatives,’ Haniya said. ‘They’ve come because it’s a huge day for us obviously.’

Ghazal nodded as some of the women started bringing in trays and snacks and refreshments for them. Her phone beeped and she pulled it out from her bag and looked at it unobtrusively.

It was a message from Hamza.

‘Not yet’ She typed back and put her phone away. She wondered how pretty Mahrukh was and whether people would start comparing the two of them, once she got married to Hamza Bhai. 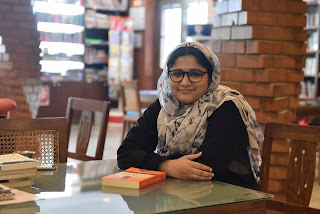 Andaleeb Wajid is the author of 27 published novels and she writes across different genres such as romance, YA and horror. Her horror novel It Waits was shortlisted at Mami Word to Screen 2017 and her Young Adult series, The Tamanna Trilogy has been optioned for screen by a reputed production house. Andaleeb's novel When She Went Away was shortlisted for The Hindu Young World Prize in 2017. Andaleeb is a hybrid author who has self-published more than 10 novels in the past two years.