My Ruin (Bond of Brothers #1) by Sapna Bhog 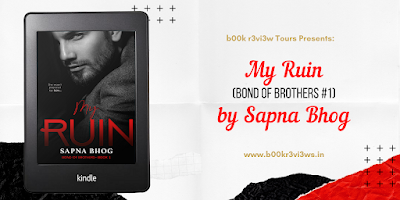 The bonds of family are unbreakable. 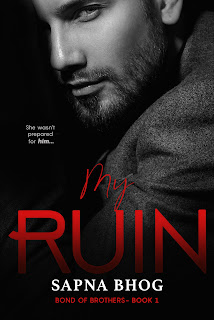 From bestselling Author Sapna Bhog comes a new romance series of friendship, loyalty and betrayal.
He never expected to run into her…
SHAURYA RAJPOOT is a man of many secrets. A sudden meeting with Myra Gupta changes the course of his life. Bound by a vow to his family, Shaurya keeps her at a distance…until she shatters all the barriers between them. Staying away from her soon becomes impossible, resisting her…unimaginable.
She wasn’t prepared for him…
After losing the only man she ever loved, MYRA GUPTA has gone through life barely living and merely surviving. But all that changes when she meets Shaurya Rajpoot. Fascinated and intrigued by him, Myra is drawn by his loyalty, silent strength and quiet reserve. She yearns to get to know him better. However his past, his family and their bitter history keeps getting in the way of them being together.
But when the past collides with the present and secrets are revealed, will love be enough? Or will one lie—the biggest deception of all—destroy Shaurya and Myra forever?

Read an Excerpt from My Ruin