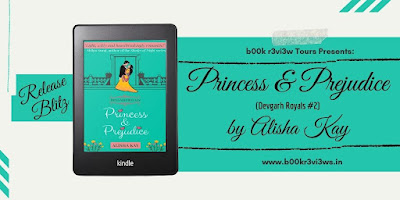 It is a funny, passionate, second chance Indian romance by the winner of the Amazon KDP Pen to Publish Contest 2020. 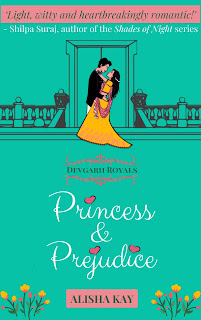 They say opposites attract, but when Yuvarajkumari Jayshree Singh, Princess of Devgarh, and Dr Aryan Sharma meet, it’s more like opposites combust.
He thinks she is a bratty and entitled princess, while she thinks he is an uptight pain-in-the-ass, who needs to have the stick surgically removed from his rather delectable posterior.
When Aryan’s sister gets engaged to Jessie’s brother, they are forced to declare a reluctant ceasefire.
But the hostilities don't cease. Instead, they erupt in an unexpected and unlikely gush of desire and longing.
With their families set to merge, Aryan and Jessie need to decide if his prejudice and her pride can be set aside long enough for the love they feel to blossom. Or will they spend eternity wondering if they'd missed their chance at happiness?

“It wasn’t my fault!”
“It never is! Her Highness Jayshree Singh is never in the wrong. It’s always someone else’s fault,” ranted Dr Aryan Sharma, as he paced up and down the centre of the maze in my garden.
I picked a piece of lint off my red Banarasi silk sari and tried to ignore him.
He had taken his coat off in his rush to play the hero and had rolled his sleeves up at some point during this never-ending lecture. The Patek Phillipe that I had gifted him when he qualified as a paediatrician glinted on his wrist. I wondered if he had ever realised its true worth.
Probably not, considering that I had convinced his sister - who was my best friend - to pretend that it was from her, and since Nivy still hadn’t made it to the big screen at that point, Aryan had believed her claim that it was the most real-looking fake Patek Phillipe that she had ever seen in Devgarh market. The fact that his sister had spent all her meagre savings on the watch ensured that her doting brother wore the watch proudly, even though he was morally opposed to fakes of any kind. Which was a good thing. If he knew that it wasn’t his sister’s meagre savings, but my more considerable ones that had paid for it, he’d probably fling it into the palace pond.
The watch suited him, I mused. It was gorgeous, almost a piece of art. Yet, it was strong and sturdy, and very, very reliable. Just like Dr Clueless himself.
It was difficult to take my eyes off his hands, beautifully shaped and strong, but sensitive. It was easy to picture him tenderly cupping a baby’s head with those hands, and even easier to imagine him cupping my breast. I shook my head to clear it, and looked away, wondering why you couldn’t find a good breeze right when you needed it. My face felt all flushed and hot.
Aryan was still going on about what a brat I was, and how he was sick and tired of my pranks. At that, I raised my hand like a student in front of a teacher, knowing very well that it would infuriate him.
“What?” Aryan barked, stopping mid-pace with his hands on his hips.
I took a moment to appreciate the sheer beauty of him in his light blue formal shirt, tie askew and sleeves rolled up roughly, all six feet of gorgeousness glaring at me fiercely. Then I relegated that moment to the back of my mind and proceeded to infuriate him even more.
“Would you really classify my actions as a prank?” I asked politely.
He notched up the heat level on his glare. If it got any hotter, I’d turn into sheesh kebab.
“Wouldn’t you?”
I pretended to think for a second and then shook my head.
“Not really. Pranks are for kids. This was more like a happy accident,” I said, with a sweet smile.
It was. A very happy accident that sent his girlfriend, Dr Arshia Thakkar, flying into the big fountain in the centre of the palace courtyard. Happy for me, at least. I managed to wipe that smug smile off her face for all of five glorious minutes, until Aryan rushed to her rescue, carrying her out of the fountain like a Bollywood hero. I was hoping he’d slip and fall on his ass, but the fates had never favoured me before. So why would they change the habits of a lifetime now?
I was forced to watch him set her down tenderly on a bench and coo over her until Munshi Ji led her into the palace for a hot bath and change of clothes. I had rolled my eyes at the drama. Hot bath, indeed. This wasn’t fricking Siberia. It was Devgarh, and we were in the middle of one of the hottest summers ever. The twit should have been happy at the dunking, instead of acting as if she nearly drowned in what amounted to exactly one and a half buckets of water.
Besides, I didn’t know why he was blaming me for it.
“Why exactly are you blaming me for your girlfriend’s clumsiness?”
I watched with interest as he gritted his teeth and took a deep breath to calm down. An effort that failed miserably.
“Arshia is not clumsy,” he yelled.
“You mean she was trying to swim the length of that fountain for fun?”
“Your dog pushed her in,” he accused, pointing a finger at me.
I stood up slowly and gathered the folds of my sari around me as gracefully as I could. Then I walked up to him and gently pulled his finger down.
“Don’t yell at me, Dr Sharma,” I said softly.
When he opened his mouth to yell some more, I put a finger over his lips.
“Zombie is not my dog. He belongs to Veer. And he didn’t push Arshia in. She tripped and fell into the fountain when she was running around like a headless chicken, for reasons best known to her.”
About the Author:
Alisha Kay writes funny, exciting and steamy stories, with spunky heroines who can rescue themselves, and hot, woke heroes who find such independence irresistible.
The first book in The Devgarh Royals series, The Maharaja’s Fake Fiancée, won the grand prize at the Amazon KDP Pen to Publish Contest 2020.